Review of Fragments of Memory

Peter Kreet's exhibition was opened by Lindsay Broughton, Tasmanian artist and educator noted for his large scale drawings and his fascination with fragments of Classical architecture.

Peter has brought together the modern and the ancient in his series of 18 works arising from a visit to Portugal. The medieval towns and cities - in particular the buildings and walls had a profound impact which Peter has explored in a very contemporary way.

The large format works are heavily textured, redolent of exotic spices in the heat of the summer sun. Richly coloured walls and fragmented facades are scarred and scratched, layered with broken tiles, crumbling stucco and both modern and ancient graffiti; they tell the tales of ages past, a brief glimpse of history alongside the everyday truths of modern city life.

The glimpses of ancient surfaces overlaid and balanced by the scrawled tags of modernity create a dynamic tension while making it clear that both have an equal and valid place in the pageant of history.

The simplicity of composition in the works enhances the monumental presence of the works granting the viewer a sense of solidity and great weight while ensuring that the scale is ambiguous. It is only the addition of a silhouetted figure in one work that gives the view of a sense of scale for the works on display

This exhibition is a feast for the senses; sensual and tactile, ancient and modern, intimate and monumental - a wonderful evocation of time and place.

Lynn Hasenkam
Artist
Posted by Peter Kreet at 2:11 AM 1 comment: 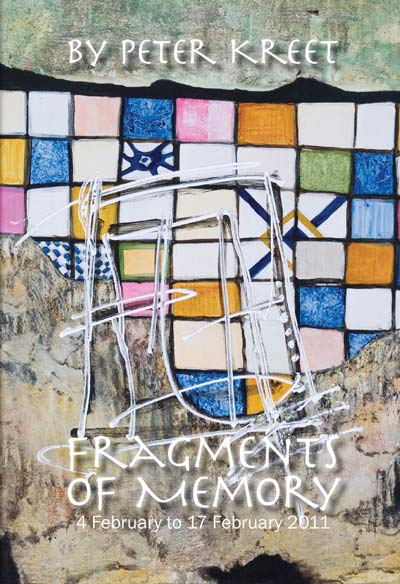 This series of paintings were conceived in Portugal and Vietnam during 2008 to 2010. The work explores the relationship between past and present, old and new based on my responses to crumbling walls, medieval towns, villages and cities and the sense of history and the events they encapsulate. Walls disfigured with age, others deliberately damaged by human activity, all contribute to their history.
In executing these works, I have endeavoured to draw together many elements in order to create a window on a lost past. For what is real is not simply external form but the very essence of things. It is impossible for anyone to express anything essentially real by merely imitating the exterior surface, for we must try to enter into its hidden essence.
Fragments of Memory is currently on exhibition at the Goulburn Street Gallery in West Hobart. The exhibition will be opened by Lindsay Broughton on 4 February 2010 at 6pm. You are warmly invited to join me and my family for the opening.
Image from the Past - Based on crumbling walls with Moorish tiles and three Sumerian figures from the Epic of Gilgamesh.
Fourteenth of July, Bastille Day - The lace work symbolises the central character of the feminine in French culture. Flanked on one side by the tri colour with the collapsed wall of the Bastille and a pool of blood on the bottom.
Muro No. 2 - A conceived portal to the past in Sintra the summer capital of the Portuguese kings.
Trapped Between the Past and a Questionable Future - The contrast between an ancient past and modern decorative elements.
Search for Time Past - Contemporary man dwarfed by the past. The size of the figure creates a new sense of scale.
Tomar No. 2 - The Templar Knights helped the Portuguese King drive out the Moors. As a reward, the King granted the knights substantial land in central Portugal where they built The Convent of Christ. Built as a medieval fortress of solid stone, the Castle overwhelms and crushes the Moorish tile work.
Tomar - As above, only here I have introduced the lack of reverence for the past by the disfiguring graffiti.
My Store - Back wall of the Myer Store, after the fire exposed its past history. I have introduced tiles to give colour and retail feel.
Rustim Pasha - The feeling of the interior of the Mosque in Istanbul.
Moon Gate - An Oriental Gate - Bridge over the thu Bon at dusk.
Bridge of Dreams - A bridge that links the Chinese and Japanese quarters in Hoi An. The sense of movement in the centre refers to the legend of the monster dragon whose head is in India and tail in Japan. The bridge was built to kill the monster and usher in an era of peace. In this sense, it symbolises the dream of a better and more peaceful world.
Endless Chasm of Oblivion - The continual defacement of the past as though we only have time for the present.
Return from the New World - The stripping of the silver and gold from South America back to Portugal. The figure in the boat guards his loot.
In Search of Memory - The past is only buried below the surface of the present and if we search hard enough we will find it.
Wreck of the Centaur - The Australian hospital ship sunk by the Japanese during WW2 with the loss of all on board. The rusting wreck lies on the ocean floor. The red crosses and the symbolic aircraft propellers commemorate the dead.
Comprehend the City's Mysteries - Traditional tiles and histories overlay.
Portuguese Girl - Fabulous hairstyle of a young woman observed over lunch.
Posted by Peter Kreet at 2:47 PM 1 comment: