Posted by Peter Kreet at 3:00 AM No comments:

Email ThisBlogThis!Share to TwitterShare to FacebookShare to Pinterest
Labels: Seafaring


I first viewed Francisco Goya’s Horrors of War during  Saloniki year as Cultural Capital of Europe. At the time it  struck me that Goya was one of the first pictorial war journalist. His images are quite graphic in their detail and are presented in a very matter of fact way .This stems from his disciplined approach to tell the truth at all cost. This attitude makes his imagery so powerful, the viewer is forced to respond in some way to the pictorial result of warfare and evaluate a personal response to the effects of war, not only on ourselves but on humanity in general.


Goya identified with the ordinary people, this is not to suggest that he was not ambitious, and strove to reach the top of Spanish society, simply that he wished to present his world in an individual way. He allowed his  citizens to stand or fall by their own personality. Goya, to my knowledge was one of the first artists to present a true vision of the efficiency of a war machine. 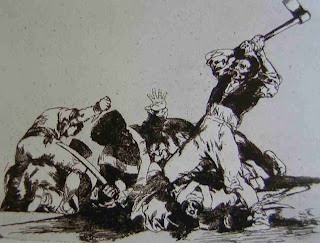 His imagery of the horrors of war, reminded me of the constant front page reportage of the Vietnam War during the 1960’s. The total disregard for human life, as though the people portrayed are not human beings .To some extent this attitude continues in Syria and Iraq.  In the case of Vietnam this continual impersonal reportage of the “T.V.War”  , resulted in the end in a general popular demand that hostilities be brought to an end.  Public opinion was such that Governments have restricted access to the front line in recent conflicts.


When Goya was busy producing these works, Europe was still in the grip of the Inquisition, Napoleonic Wars, and general internal strife within Spain, between conservatives and liberals. No matter what your own personal view about Goya images. Most of us are left with a sense of pity for the victims, and the feeling of terror these people must have felt. The painting “The Third of May” express these sentiments .admirably 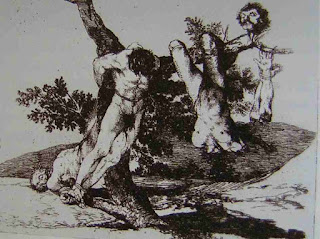 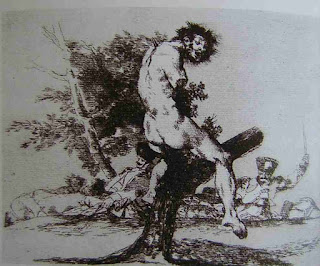 "This is worse".
Etching & aquantint.
A good example of  war time journalism. 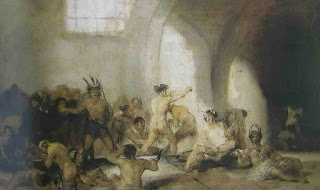 "The Mad House" Accademia de Bellas Artes de San Ferando, Madrid.
Image of scial conditions in Spain.
The images suggest a total breakdown of basic humanity. A world were the rabble or their military counterpart have taken charge. Not that this blood lust  is only a particularly Spanish  quality. Unfortunately is raises its head everywhere. But, Spanish culture historically does not seem to the outsider very compassionate, we only have to recall the Civil War, the Inquisition and the continual blood lust of the bull ring. No matter how much bull fighting may be justified by Spaniards as a mark of valour, such medieval actives seem out of date in the 21st cent.. No matter what our personal opinions on these matters, and Goya’s political and social views, there is no denying the power of his social commentary over a very large range of subject matter. 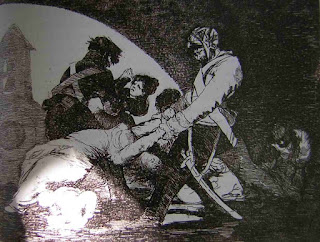 "Nor Those", Etching & Aquatint.
Rape and slaughter of women.