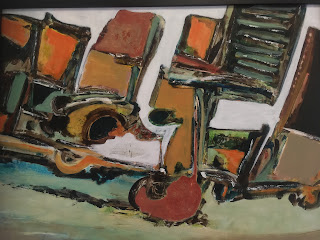 Over the years I have been fascinated by the pictorial elements of old walls, ship wrecks and industrial machinery and their influence on my abstract paintings. The island of Tasmania fortunately has an abundance of wrecks, no doubt due to its location on the roaring 40s that helped the early explorers circle the world with the wind at their backs.

This latest exhibition has been inspired by an riveted  iron steam ferry that ran aground in the D'Entrecasteaux Channel in the 1920s. These ferries were used to ship timber, milk and apples from the  Channel ports up to Hobart before the establishment of road access. SS Laura being the inspiration of this series of painting has provided me with a great array of abstractions developed from drawings often made by climbing inside the vessel at low tide.

The following pictures illustrate a few of works. 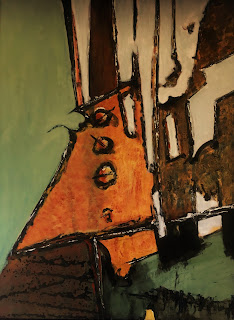 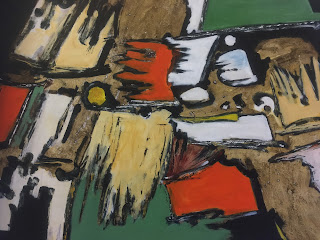 Not sure when the Lorea was built, but a steam ship of the same name was built in Glasgow in 1878 for Howard Smith a Victorian shipping company. They eventually sold it in 1920 to Electrolytic Co in Hobart. This vessel founded in Storm Bay at the entrance to the River Derwent. Like so many wrecks there is little detailed information available.

Update the history of the Laura I have been working on was an iron steamer of 63 tons, built in Brisbane in 1873, so it is a little older than the above Laura. She ran aground in 1929. 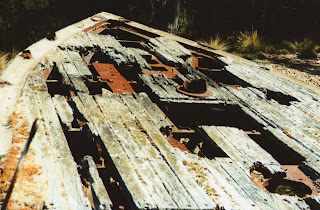 SS. Laura as seen today.
Posted by Peter Kreet at 3:05 AM No comments:


What a delight to experience two very fine violinists entertaining a rapt audience with a selection Bach’s concertos that always move the heart strings. I had not attended a Tognetti concert for many years and it was wonderful that he has not lost any of the youthful enthusiasm and excitement he manages to pack into his performances. His dancing figures exploring the violin strings as he plays. Today all these years later it is hard to understand why the Australian Chamber Orchestra could not, not entice the two hundred subscribers required for them to continue their Tasmanian visits, much to Tasmania shame.


Tonight he is accompanied with another gifted violin play, Finnish Satu Vanska who together explore Bach’s conversations with a select group of string instrument’s musicians from the TSO. What a privilege to hear them play on Richard’s 1743 Guareri violin and Satu’s Stradivarius. Both sets dancing fingers moving with such ease up and down the key board, along with the TSO string players held the audience in raptures. Bach at any time is a memorable musical experience and along with the big surprise of the evening Peteris Vasks’ Vox amoris created a night to remember.


Vasks’ fantasy for violin and strings proved to be a show stopper. Composed  by Latvian composer Peteris Vasks, Vox amoris is a very emotional work. Vasks  not a household name in the West and it is only since the collapse of the Soviet Union that he has made an impact worldwide. His music reaches beyond simple tone-painting and reaches into the relationship between humanity and nature. Vox was written especially Richard Tognetti and his playing did not disappoint. It is about the greatest power on earth – love and there is no better interpretation about a love story than violin and strings orchestra. The wave of emotional music moves softly and slowly as love itself becomes stronger. If you are still to hear this piece it is highly recommended.
It is always impossible to convert musical language into speech, you need to listen to the string instruments in conversation with each other, especially when controlled by two extraordinary violists. I hope this work will eventually reach the wide audience it deserves, as Peteris Vasks remarks,’ make the world a brighter place, more open to love.
Posted by Peter Kreet at 7:21 PM No comments:

Leicester, what more can you say, from Battlers to Kings of England. Like many followers of English Premier League around the world the unbelievable has become fact. Who could have believed the impossible was possible? Player considered by more prestige clubs considered expendable forged together into a united troop to take on all comers and win. While retired Socceroo Mark Schwarzer played a small part in playing six matches last seasons to keep Leicester in the fight from relegation.
Then there was the midfield, who valiantly in defence kept Leicester in the game along with Claudio Renieri's fairytale belief in the Foxes that anything is possible. At the beginning of the season many eyes were on Bournemouth's attempt to mix it with the big boys, while Leicester City was relegated to 5000 to one. Such a triumph must inspired many in this competitive world of ours to greater belief in self. If Leicester can do it so can we. There are so few example of the extraordinary becoming believable that the Foxes achievement will live for ages.
Posted by Peter Kreet at 12:07 AM No comments:

Something triggered by memory.

Something triggered by memory.


Memory is a strange thing, often you are sure of your facts, only to discover that your recollections have been subjected to Chinese whispers or another member of the your party recalls an entirely different version of events. Most people living in Australia would think the eating of a banana to be a very ordinary event, most likely they were spoon fed their first banana as a baby in arms. Thinking back over breakfast with my sliced fruit sitting on top of the breakfast cereal, I recalled my first encounter with this tropical delicacy. That first encounter still fills me with wonder, this is natural enough, and Britain was hardly overrun with bananas during the war. Such exotic fruit that reach her shores had to run German blockades of U-boats all the way from the West Indies before they appeared anywhere near our village. The sheer fact that such fruits were grown far away on some tropic island far away from the daily bombing and food shortages in itself put bananas into the dream class.
Our big event occurred when my mother returned home one morning and presented my sister and myself with a banana she had just purchased at a Red Cross Auction for the princely sum of one guinea, an amount equivalent to a weekly wage. As children we had no idea how such a delicacy was eaten. After much debate our treasure was duly divided into two equal half’s and after instruction as to how to peel it we proceeded to suck this strange fruit very slowly so as to prolong the flavour for a long as possible. If my memory services me correctly we held our banana very gently so as not to squash it, the consumption or rather licking of that banana took the best part of an hour. I’m not sure whether we set any sort of time record, but it would several years
Posted by Peter Kreet at 6:22 PM No comments:

The end of the Second World War saw the influx of many European artists who had been displaced with the redrawing of Europe's map and the emergence of an enlarged Communist block in  a Eastern Europe. Many of these artist joined their fellows who had fled to Australia during the events in Germany and elsewhere in Continental Europe during the 1930s, and later helped to create Montsalvat we know today . Justus Jorgensen, a first generation Australian had in 1938 started on his life's work of establishing this artists collective at Eltham just outside of Melbourne.
I first became aware of Monsalvat in the 1950s talking to many of these New Australians emigrant artists as they often meet  in Loronenzi Wine Bar a coffee shop in Sydney that many artists used  on a regular bases. Often they had just returned from Melbourne after spending a week or so helping build this great project, Jorgensen wonderful contribution to Australia's cultural life. At the time the country was hell-bent on the demolition of vast numbers of the country's early Georgian and Victorian buildings. Many fine sandstone buildings were destroyed  and used as fill. Fortunately a number of the doorways and various other sculpture reliefs were rescued and given a second life in the building of Montsalvat. Jorgensen a trained architect attempted to revive both provincial and major buildings in his reconstruction project, to some extent he represented Australia's version of the Art and Craft movement of the late 19th cent. This recycling resulted in The Great Hall, Long Gallery and church along with a number of mud brick French Provincial cottages. The philosophy behind Monsalvat was to create an artists collective were artists, writers, musicians and craft people could exchange ideas and work in a peaceful environment.
Jorgensen himself a professional painter, there are some 3000 works stored at Eltham has strangely been ignored by most of Australia's art writers and critics over the years. An early convert to atonalism while studying under Max Meldrum Jorgensen was always a very traditional artist, his work has a simplicity and direct appeal. A regular exhibiter to the Archibald Portrait Prize were his work displays a more academic  approach. The reason for his almost total exclusion from Australia's art history is hard to explain. He did not exhibit widely, but then many painters don't, so there must be a more convincing argument. Whether his work displays a lack of conviction for any particular approach has any validity is another criticism.
What ever ones opinion about his artistic merits, Jorgensen's contribution to Australia's cultural life remains inspiring, Perhaps one day his gift will be fully appreciated.
Posted by Peter Kreet at 3:13 AM No comments: