Toys are fairly central to most childhoods, whether a simple piece of wood, a rag doll or some sophisticated western what not. No matter what your childhood economic circumstances, we treasure those moments of pure imagination, when we could create our own world and people it accordingly. Years ago I had visited a Money Box Museum in Amsterdam, all very Dutch, but still I was surprised to find a Toy Museum in Sintra, Portugal, so people establish museums for all sorts of things.


The Museum of Bringuedo in the centre of Sintra, possesses a very fine collection of some 40,000 toys ranging from 1930’s Hornby train sets, lead soldiers, dolls, and every other kind of toy imaginable. Collections of any sort must reflect to a great extent the interests of the collector, and when I cast back into my own memory and recall the World War II battles I played out under the dining table, because an uncle of mine had lent me his collection of 1930’s German lead soldiers.

The owner and founder of this museum turned out to be an elderly gentleman, now unfortunately confined to a wheelchair due to a recent stroke. This however, did not stop him from doing the rounds of “his museum”. Luckily he was very talkative and only too anxious to talk about his passion. He had been collecting  all his life, and had set up a repair and restoration workshop in the museum where children of all ages could bring their treasures for renewal. Many toys are discarded, and he felt it was his duty to give them new life. Everything in this world has memory that has witnessed different time frames. I am sure if this establishment had been around during Hans Christian Andersen stay in Sintra, he would have felt a great affinity. The owner had built a special playroom with puppets and story tellers, so each child could relive their own make-believe worlds.

Apart from this great collection of lead soldiers from every corner of the globe, he had acquired a few ancient bronze toys from Syria some 3000 years old. There were also a few carved marble toys, also from the Middle East. I believe simple moulded clay toy animals have been found in Anatolia dated 6000BC. It is a great pity that as adults, we tend to forget the joys of childhood when time is always the present. When anything is possible, and we endow our toys with a life of their own, and the only restriction is imagination. I often wonder whether in this contemporary world of  were children are fed a diet of preprogramed toys, and technological wonders whether children are the real losers in their inability to entertain themselves, were everything is in the fast lane, and there is no time to think and dream.
Posted by Peter Kreet at 4:46 AM No comments:

Clinging to the northern slopes of the Serra, some forty-five minutes by train from Lisbon sits Sintra.  This former summer capital of the Portuguese Kings, offers the early morning  raiser a sight not to be missed.  Covered in early morning  mountain mist, castle turrets, conical chimneys, and segments of peaks piece the clouds offering the most jaded traveller a fairy tale vista. It is little wonder that the town has attracted writers, musicians, and artists over the centuries. Hans Christen Andersen spent a year here writing fairy tales, while Richard Strauss on visiting Palacio da Pena, believed he had found the home of the Holy Grail. Strauss recorded in his diary, “This is the happiest day of my life, I have travelled in Italy, Sicily, Greece and Egypt, but have never seen anything to equal Pena. It is the most beautiful sight I have ever witnessed. This is the true Klingsor garden and up there above  in the Towers  the Castle the Holy Grail.”


There is more to Sintra than the Castle of Pena, the town is rich in Royal Palaces, Castles, Museums and parks, not to mention the numerous mansions built by the mega rich from South America and the Royal families of Europe. I had decided to spend the next month here gathering material for a painting exhibition. The difficult part was going to be what to ignore, every where I looked picturesque scenes presented themselves. After spending the first week walking along cobblestone lanes, visiting churches, and viewing Moorish fountains, I decided to attempt to covey the many layers of Portuguese history through the tile decoration, so much loved in this country. Nearly every building in Portugal appears to be covered in ceramic tiles; the use of this form of decorative motif often is included in the original architectural design. Many architects design the tiles themselves, while the many ceramic tile workshops employ several artists to create and carry out the design and painting. No building is considered complete without some form of artwork, Portugal must be an artists’ paradise. I visited several of these workshop during my stay.


I carried out many on the spot sketches and reworked them into abstract designs. Fragmented tile patterns surrounded by textured walls, I broke the complete tiles up to create a sense of history as they are in their own way fragments of past memory. I was quite pleased with the way the watercolour washes on the walls took on a cork like appearance, this allowed me to develop three very important elements of Portugal, the legacy of Moorish tiles, textured stonewalls, and the cork trees. 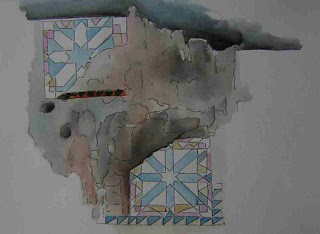 Sintra is full of surprise, it houses one of the best private modern art collections of the 20th cent. The Berardo Collection, includes many major artists of this century, Magritte, Pollock, Bacon and Warhol to name just a few. Joe Berardo’s collection is so large, that it seemed as though half the works in the Museum of Modern Art in Lisbon are on loan from his museum. Then there is the eccentric Brazilian millionaire’s contribution, Antonio Monteriro’s Quinta da Regaleira built in 1890. This feast of the absurd is filled with every kind of folly imaginable, secret grottoes, forts, castles, underground lakes, this would have to be one of the great examples of exoteric. There is even an underground staircase taking you down some 27m into the earth to what is called the Guardians Gate. This several acres of park of follies have been built around classical mythology, were Monteriro has tried to recreate the worlds Virgil, Dante, and Milton , with a touch of the Knights Templars thrown in, a world to delight any child. 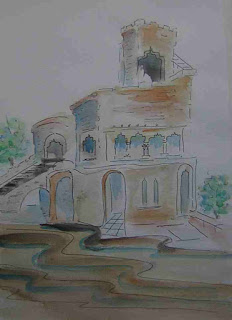 The Palace of Pena set on a mountain top creates a presence all of its own. Set within a large park like woodland, the visitor wanders along numerous paths and tracks, until you suddenly come across the palace. Built at a time of great Portuguese wealth were no cost has been spared. The range of architectural detail and décor is hard to describe, but the range  runs from The Arab Room, to an over the top 16th cent alabaster Chapel filled with every kinf of oddities from every corner of the globe. Then there is the King’s oval shaped bedchamber,  a ballroom lit by German stained glass windows complete with four life-sized turbaned torchbearers holding a giant candelabra. I need say no more,

One afternoon Heather and I were taken by our host to a little summer house rebuilt by a Professor of Architecture at Lisbon University. This little building consisted of two floors, one room to each floor with a narrow staircase joining them, with a tiny bathroom halfway down the stairs. The great delight in this building was theunusal use of eye patterns and reliefs on the walls and around windows, even the patio chairs had eyes cut into their backs. The whole house was a delight and very imaginative, although I don’t know how two people could live there at the same time! 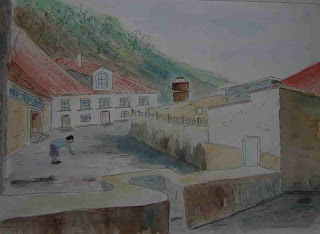 Walking the track to the National Park I came across this scene near the church of Santa Maria. Every day I would climb the mountain roads, forever going up and down, so we discovered many little treasures tucked away in the hilly landscape such as the church below Santa Maria. 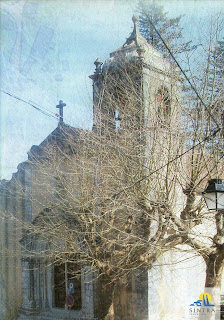 The church of Santa Maria first conceived in the 12th centit took many centries to complete. The church is one of the few remaing examples of medieval architecture. The building has a Gothic Romantic feel, in this sense it encompass the spirit of Sintra. The church face the little square above.

Posted by Peter Kreet at 5:31 AM No comments: 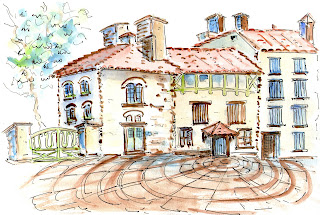 Few events arouse as much enthusiasm world wide as the Tour de France, an event unparalleled on the sporting calender. A road race requiring both physical commitment, and physical punishment unknown in most sports. A commitment of some 22 days of concentration and stamina if a rider is to avoid injury, let alone finish. This is one of the world's most watched events by an audience who for the most part, have not ridden a bicycle since childhood.

This year's Tour has a special interest for many Australians, not only has the country  it's first tour winner taking part, but the country has it's first National Team in the form of Greenedge. It remains to be seen whether Cadel Evans, as the oldest Tour winner since World War Two, is able the defend his title. A race of some 3630 kms takes on the dimensions of a modern day pilgrimage.  All this suffering and heroism would not be out of place in a pilgrimage to the Holyland during the Middle Ages.

Overlaying the event, we have a high priest in the form of Phil Ligget who guides the viewer with both a rich dialogue and evaluation of tactics, as the riders wind their way up and down mountains, around and through villages, while he casts a historic eye on passing chateaus and sights of interest. These riders are travelling at some 40 to 50 plus kms per hour, and anything can happen. Hardly a day passes without a pile up, broken bones, not to mention many bloody grazes and dislocated bones.

The Tour also has a somewhat voyeur aspect, many female friends have expressed their pleasure at viewing the shaved, bronze legs and arms of the contestants. then there are participants articulating their dreams, while they resign themselves to reality. A Greek Drama could not present more. In the background the possibility of a raid by the drug squad or some other internal intrigue. I would love to have watched the early Tours, when riders refreshed themselves at local bars and cafes on route.

The Tour is the ultimate reality show, played out on that vast stage called rural France, where only the strongest will survive. What I enjoy most is the modern coverage of the race,  the viewer is effortlessly moved back and forth from breakaway group to peloton, set in a background of mountain and, ruined castles, where these young, lean riders strut their stuff. The event brings out the best and worst of human nature,  riders at one level have great concern for each other, while commiting themsleves totally to try and win for their team. Personally, I don't understand much about the rules, but there is obviously a considerable amount of tactics envolved. Your team rider has total loyality.

Then there are the crowd who line the route, on top of mountains, many trying the catch their moment of glory in the sun. How the riders find their way through this throng is hard to imagine, but they do. These fans often wait for hours in the wind and rain, waiting for their heros to appear, but they are all heros in different ways. So, as the peloton, packed like sardines in a tin, speed down the road, the voices of Liggett and Sherwin draw everything together, such is the Tour de France.
Posted by Peter Kreet at 5:07 PM No comments: